Gowda Saraswatha Brahmin Community in Kerala State, at the Maha Sammelan at Kozhikode on 31st October and 1st Novemeber 1981, placed before His Holiness Shrimad Sudhindra Thirtha Swamiji of Shri Kashi Math Samsthan, their unanimous desire to have an All- Kerala organization.

As supreme Head of the G.S.B. community His Holiness directed the community in Kerala state to organize into one body under the name and style “ GOWDA SARASWATHA BRAHMANA MAHASABHA – KERALA” to secure all members of the community all-round progress in their social, cultural and economical life.

Thus a long outstanding desire of the GSB community in Kerala was fulfilled.

The objects of the Mahasabha as per the constitution are as follows:

The organizational set up of the Mahasabha is detailed in Part III Article 17 of the constitution. The President and other office bearers and other members of the State committee are nominated by the Paramadhikari, H.H. Shrimad Sudhindra Thirtha Swamiji of Shri Kashi Math Samsthan.

GSB community in Kerala state has hundreds of organizations working for various purposes. But GSB Mahasabaha - Kerala is unique in its structure and activities due to the following reasons:-

The smallest unit of the Mahasabha is a Gramam which consists of about 100 houses. The whole state is divided into 3 Zones and the boundaries are defined according to the revenue districts. The activities at Gramam level are guided by the respective Gramasabha Council which is democratically elected by the general body in the Gramam. The three Zones have Zonal councils to coordinate the activities of Gramasabaha Councils of the respective Zones. The Zonal Council consists of the Zonal representatives from each Gramam. The Zonal Committee is formed by an election in the meeting of Zonal representatives.

The whole process is smoothly executed under the leadership of the State Committee.

Mahasabha had started functioning in full swing during the year 1984 after the formation of above 100 units all over the state. State level Swayam Sevak Shibirs were being conducted annually, mainly with a purpose to develop the cultural and spiritual standards of our youths and children. Apart from this, discourses on subjects like education, finance, personality development etc. were also there in the Shibir.

“Prathibha Sangamam” to honour the students scoring high marks, “Nava Vatu Sangamam” for newly upaneeth boys, Marriage Assistance Scheme, collection of census data, Sandya Vandana classes, etc. were some of the main activities of the Maha Sabha. During the Prathishta ceremony at Ambalamedu Shri Kuladevatha Temple Complex, Ernakulam, Mahasabha volunteers had an important role for the success of the function.

But, unfortunately the activities of the Mahasabha became slow by the year 1998-99.

After a period of 12-13 years, people of Kerala realized the fact that the absence of activities of an organization like Mahasabha had an adverse effect in the cultural and spiritual life of the youths and children of the Samaj and the situation was serious. High demand was there to revive the activities of the Mahasabha.

As such, a team of samaj bandhavs, consisting of Shri P.K.Damodara Kamath, Thuravoor, Prof. N.Prabhakara Prabhu, Shri R.Ratnakara Shenoy, Ernakulam and Shri K.S.Ramachandra Pai, Mala, alongwith the request of Shri. N.Purushothama Mallya, visited Shri Swamiji during their Camps at Mangalore and Dahisar, Mumbai and submitted the suggestions and demands prevailing in the Samaj. After a long discussion with the team, finally Shri Swamiji kindly gave their permission to rejuvenate the activities of the Mahasabha. On 19th March, 2012, Shri Swamiji issued an Order reconstituting the State committee of the Mahasabaha nominating Shri N. Purushothama Mallya, Kochi, as the President and other 24 Samaj bandhavas as office bearers and members.

On 8th April 2012, in a state level workers meeting at Kochi, H.H. Shrimad Samyameendra Thirtha Swamiji have blessed and declared the starting of functioning of the activities of the Mahasabha.

Since then the state committee is making perpetual efforts to reconstitute the units and rejuvenate the activities all over the state. 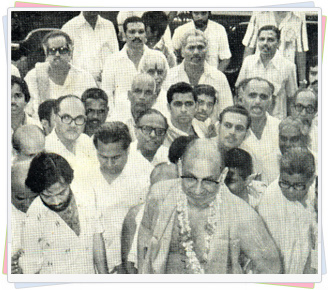 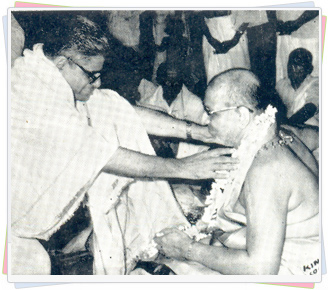 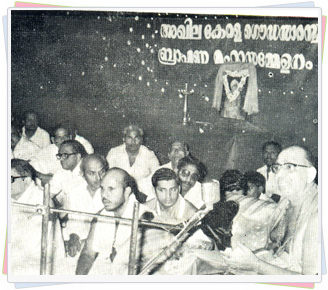 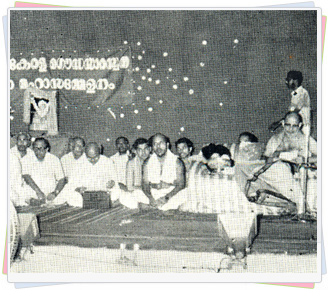