During the past two years, State Committee could reconstitute 67 Gramasabha councils and form the Zonal Councils in South and Central Zones. Samyuktha Gramasabha councils at Kochi, Cherthala and Alappuzha have started functioning. A “Guru Samaksham” programme participating around 500 office bearers and workers, from Kerala has been conducted at Sree Venkataramana Temple, Car Street, Mangalore, on 26th January, 2013, in the divine presence of Paramadhikari, Poojaniya Dharma Guru H.H. Shrimad Sudhindra Thirtha Swamiji of Sree Kashi Math Samsthan.

Swayamsevak shibirs of One / Two days are being conducted at State Level, Samyuktha and Gramam level. A two day Swayamsevak shibir was organized on 27th and 28th of April 2013, at T.D. School Complex, Kochim in which H.H. Shrimad Samyameendra Theertha Swamiji blessed the participants and winners of competitions and top scorers of various examinations. Scholars of our samaj like Sri.N.Purushothama Mallya, Kochi, Sri.Vinod Rao I.A.S. (Baroda), Dr.Raghavendra Acharya, Mysore, Sri Sudhakara Bhat, Mangalore and Sri.P.K.Damodara Kammath, Thuravoor participated and delivered speeches and conducted classes on contemporary subjects. These dignitaries were honored in the sabhakaryakrama, for their dedicated, sincere and unique services towards the Samaj and were blessed by H.H.

Efforts are being done to conduct classes targeting the students for the purpose of preparing for civil services examinations and other such specialised category.

An Education Cell consisting of Shri. P Ramesh Prabhu, Convenor, Prof. N. Prabhakara Prabhu, Adviser, and Shri. Dinesh R. Kamath, Alappuzha, member, is formed for the purpose of conducting Education Shibirs in different parts of the state. The first such shibir was organized at Kochi on 7th April, 2014. Well wishers of the Mahasabha, like Sri.Vinod Rao, I.A.S. Vadodara, Gujarat, are supporting this venture, sincerely.

One cultural shibir was conducted at Chendamangalam at Upamekhala level and one gramashibir at Kodungallur. Kodungallur Sree Krishna Swamy Gramam has conducted “ Venkatakalyana Parayanam” on a monthly basis for one year and celebrated the concluding ceremony on 31st Aug.,2013, with a grand function.

Thiruvananthapuram samyuktha gramsabha has been functioning enthusiastically with spiritual, social activities for the past several years. Monthly get-together with Sathya Narayana Pooja is being conducted systematically without any break.

Various spiritual activities like discourses on Sandyavandana , Ramayana, Kashi Mutt Guruparambara and History, Madhva Sampradaya etc. are going on at Kochi under the leadership of Samyuktha gramasabha.

Apart from the spiritual and religious activities, many social activities like medical aid, financial assistance etc. are being done in the Gramams at Thiruvananthapuram, Thuravoor, Palluruthy, Chendamangalam etc. and other Gramams, all over the state.

Thuravoor Samyuktha gramasabha has given leadership for doing tremendous efforts to give a medical aid of above Rs.1.75 lakhs to a samajbandhu whose both kidneys were failed.

In North Zone, Sree Sudheendra Seva Mandal, Kanjangad, which has been performing glorious Samaja seva for past several years, by doing tremendous activities in spiritual, financial, social, educational and medical area, has been affiliated to the Mahassabha. The Sevamandal covers 3 gramams at Kanjangad and Neeleswar.

G.S.B Seva Sangaha at Kasargod is another institution which has been affiliated to the Mahasabha. It covers 2 Gramams at Kasargod. The Seva sangha also is doing several activities in spiritual, religious and social fields.

A Zonal Council is co-ordinating the functions of gramasabha councils in South Zone. Zonal council was formed for Cental Zone on 1st June, 2014 in the Zonal meeting held at Balakrishna Swamy Temple at Kuzhuppiilly. 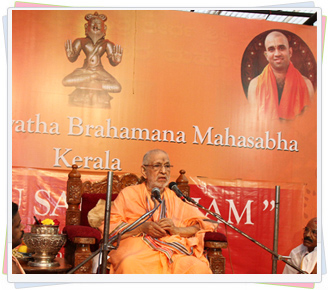 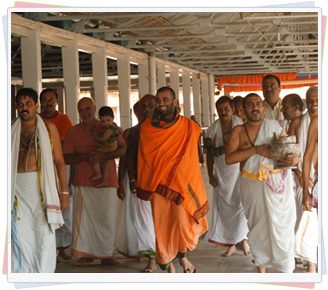 During the year 2014 all the pending Gramasabha councils will be reconstituted.

Steps are being taken to strengthen the organizational set up by developing a healthy Management information system.

Leadership training camps are being planned as the organization is urgently required a group of young qualified leaders.

The mission of the Mahasabha is functioning by developing a strong pavement of spirituality and doing religious, social, education, Medical and financial activities, so as to attain the object of human birth, DHARMA, ARTHA, KAMA and MOKSHA, as per the message given by the Rishi Parampara of our great Arsha Bharatha.

By the blessings of Paramapoojaniya Dharma Guru H.H. Shrimad Sudhindra Thirtha Swamiji and directions from H.H. Samyameendra Thirtha Swamiji and with the co-operation of enthusiastic and sincere samaja bandhavas, we are confident that the Mahasabha can regain its glorious position, as it was in during nineteen ninetees, within a short period.